You Ain't Heard Nothing Yet 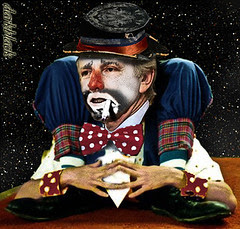 WASHINGTON - Just when it appeared Julie Myers had cleared every hurdle in her quest to officially become the nation's top immigration official, a dreadlocked wig and a prisoner's outfit could cost her the job.

Myers, director of Immigration and Customs Enforcement, ran into trouble earlier this month after she and two other agency managers gave the "most original" costume award to a white employee who came to the agency's Halloween party dressed as an escaped prisoner with dreadlocks and darkened skin.

Some of my readers might note that I am no stranger to controversies of this type, and therefore I recuse myself from judging the actions of Myers or her chosen contestant, leaving that to others more worthy than I.

But something about this story troubles me...A disconnect seemingly unremarked upon, to wit:

Myers has apologized repeatedly for the costume incident, saying she was "shocked and horrified" to learn the employee had altered his skin color...

She was shocked that he 'had altered his skin color'...Yet she still awarded him the prize.

For a costume involving altered skin color. That the individual had worn to work in a government office all day.

And then, of course, an expert offers an opinion:

Some key lawmakers have rallied to her defense, including Joe Lieberman, the Connecticut independent who chairs the Senate Homeland Security committee, and Sen. Susan Collins, R-Maine, the panel's top Republican.

"Senator Lieberman regrets her lapse in judgment regarding the Halloween incident," spokeswoman Leslie Phillips said. "He is inclined to support her nomination, given the committee's review of her entire record, the fact that the union representing 7000 ICE employees supports her and her year's experience in office."

Bear in mind that this is the same Joe Lieberman who opined about another individual over a year ago:

Lieberman angrily demanded that Lamont denounce the action and sever all ties with Jane Hamsher, the founder of the Web log Firedoglake, who posted the photo on another blog, HuffingtonPost.com.
...
Lieberman called on Lamont to ban Hamsher from traveling with the campaign, refuse to take any money raised by Hamsher, and remove any links to her postings on his Web site.

But then, this wouldn't be the same Joe Lieberman who promised to investigate the U.S. Government's response to Hurricane Katrina while running for office last year, and quietly closed the door on such efforts this year in his role as head of the Committee on Homeland Security and Government Affairs...Now would it?
Posted by darkblack at 2:53 PM

A little waltz on teh google this afternoon quickly led me to learn Mz Myers was Ann Coulters editor when they both attended Cornell.

The things they teach in school these days. *sigh8

Anyway the two faced Lieber-amnesia is no surprise but certainly does pile on the boundless dung sized pile of contempt.

Thanks for addressing it here!

Wow. Well first of all, as a DB newbie, I am impressed that you have upset so many people. I actually remember that flack over the Lieberman face and now here I am... reading your blog and chatting it up with you at the salon.

I am in good company.

What I thought about the Julie Meyers issue and continue to think is this... they are only pissed off because it got into the open. Otherwise, it is still the same funny f*cking joke to them. They are just pissy about it now, not really sorry I think.

Thank you, ES and Fran.

I would concur with that assessment, Fran. Time and again they show themselves insincere in matters of race relations.

In my case, many of them secretly reveled in the image's implications of minstrelsy, while facetiously condemning it as representative of the Left's 'racism', as did the execrable Hannity at FOXNews.

Hannity said bad things about you. It is the ultimate compliment, is it not?

Execrable is on a good day, mostly he is much much worse than that.

WOOT!!
Oh yeah, I was there for the blackface meltdown.
I was really surprised at the time at the outcry.
I temporarily forgot how many thin skinned people who look for controversy and then scream bloody murder are out there.
Lieberman can still kiss my ass.

Not me personally, Fran...It was more of a attempt to attack Hilary Clinton via FDL and Jane Hamsher.
Delivery Boy Hannity won't even fight fair against girls, the gasconading putz.

Busted, truthfully, I shouldn't have been surprised...The point I was addressing became severely overshadowed by the deeper nuances of the imagery, and many were so inured to attempts at humor from myself that they thought that Old Black Joe was intended to be funny as well.
It wasn't, but I failed to make that clear.