I'll Meet You In The Next One 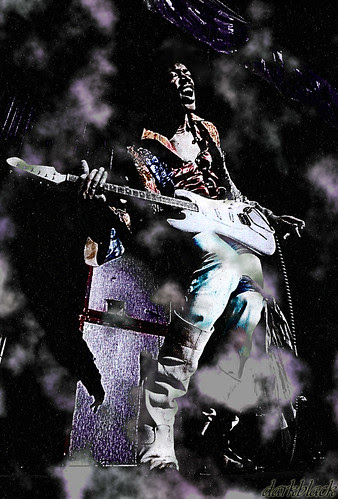 Tomorrow would have been Jimi Hendrix's 65th birthday.

He's a permanent touchstone for me, musically and in a spiritual way also.
Much like Thelonious Monk and John Coltrane, demonstrating what one can do to transcend the boundaries of one's instrument and oneself, by extension.
And like all who had so much more to give...he left too soon.

One of my mother's most potentially traumatic memories was being forced to endure the obnoxious teenage (and is there any other) version of darkblack incessantly playing a cassette of The Essential Jimi Hendrix, Volume One on the car stereo during a 950 mile trip...

No doubt, (and not for the last time) she considered me to be a punishment from a vengeful god for that, and aeolian cadences be damned.

It ain't nothin' without the sound:

Damn that's good- I luvz me some Jimmie!

WTF was I thinking when I spelled his name? His work is age appropriate to me!

Well, Fran, if you can remember the name...You aren't really spelling.