The Old Catapult Ain't Propagandin' Like It Used To 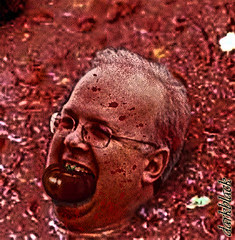 Former White House aide Karl Rove said yesterday it was Congress, not President Bush, who wanted to rush a vote on the looming war in Iraq in the fall of 2002, a version of events disputed by leading congressional Democrats and even some former Rove colleagues.

Rove said that the administration did not want lawmakers to vote on a resolution authorizing the use of force against Iraq that soon because it would "make things move too fast," before Bush could line up international allies, and politicize the issue ahead of midterm elections.
But Democrats and some Republicans involved with the issue at the time said yesterday that Bush wanted a quick vote.
...
News accounts and transcripts at the time show Bush arguing against delay. Asked on Sept. 13, 2002, about Democrats who did not want to vote until after the U.N. Security Council acted, Bush said, "If I were running for office, I'm not sure how I'd explain to the American people -- say, 'Vote for me, and, oh, by the way, on a matter of national security, I think I'm going to wait for somebody else to act.' "
...
Ari Fleischer, the White House press secretary at the time, said Daschle had pressed Bush over the summer to bring the matter to Congress but for consultation, not necessarily a vote. Bush decided to seek a vote authorizing force, Fleischer said. "It was definitely the Bush administration that set it in motion and determined the timing, not the Congress," he said. "I think Karl in this instance just has his facts wrong."

Former White House chief of staff Andrew H. Card Jr. was asked on MSNBC yesterday about Rove's comments but told only that Rove asserted Democrats pushed Bush into war. Card laughed and said that "sometimes his mouth gets ahead of his brain."

A cursory look at the facts of history proves Rove either an opportunistic liar attempting to perform remote damage control on Bush's Good Ship Lollipop as the bow begins to rise for the final plunge...Or a sociopathic liar, whose only thought is to save his own miserable skin prior to a judgement he knows will be harsh and unforgiving.

As for the mass media which persists in spreading these self-serving mendacities in a credulous, breathy fashion tucked between commercials for laxatives and ED remedies...Thanks for once again demonstrating your looming irrelevance.

News flash, Karl...The judicious study of discernible reality has claws that catch and jaws that snatch...And you are in the cage with it now, wearing pork chop perfume and a come-hither smirk.

How does it feel to be one of the beautiful people?
Posted by darkblack at 11:16 AM