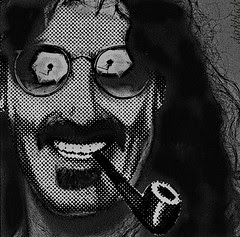 For folks who might need a bit more information than others...Zappa Wiki Jawaka, of course.

A nice piece of music for the delicate ears surrounding lovely Laura:

TenGrain has the previously lost hot poop from FZ in his later years...A rather stark output of outlook.

Blue Gal gives us a gen-u-ine look at your thumb...er, abstinent dancer. Cough, cough. Ahem. Hey, isn't that a horse?

All Life Is A Blur of Republicans and Uncle Meat.

And for Mr. C. B. and reddyrooster:

I had heard the Let's Move to Cleveland thing a while back but had completely forgotten about it! Plus, this is a much groovier rendition. Ha! Great stuff.

Many thanks from myself and the Rooster, (although he has relocated several years ago now to the lovely environs of Appleton, WI).

I second my brother's motion!

BTW... our sister's nickname is "Dinah-Moe Humm" which is even funnier given she's a religious right winger. Ha, ha...


The proper 'tude but let's not forget FZ hisself at times verged on shall we say ...Snitchness. Now, I admire a great deal of FZ's musick, but he was anti-drug (even firing MoI band members for minor cannabis use, did he not), and at times hung out with the Monkees, Mike Curb, Mike Douglas, Carson, other LA ... semi-conservatives. Quite a few 'heads (as in Grateful Dead) claimed FZ may have been involved in some narc-activity. I doubt it, but his harsh anti-drug stance sorta bugged me (And others). OK, maybe the Feds should bust big-league heroin or meth traffickers (even then debatable). But pot smokers? Zappa was a bit f-ed up in that regard, IMHE.

Well the kids are ALL in school today (can I get a "whoo hoo"? .. I kid, I kid...... )so, I was able to listen to all of them.
Wind Up Workin In A Gas Station, for sure my fav. Anything that gets me out of the chair and onto the "dance floor" is awesome in my opinion. ;p

That's what I'm here for, ZC - to present unheard-of things.

CB and reddyrooster - Keeping it in the family, eh?

J - I tend to look at FZ's attitude as a balancing act between art and commerce, leavened with a disregard for the vast majority of drug culture habitues who just wanted a mental vacation, as opposed to anything transformationally shamanic.

If one knows that one's creations are marginalized from inception, it's behoovery to appeal to the conventional mores through other means - for example, not providing the mass culture with an easy hook to discount you by saying "Ah, they're all a bunch of dopers!" - which they may well do anyway, but at least it's refutable if one is actively 'straight' in that regard.

Some of the earlier references to FZ's attitudes on drugs indicate a place of naive idealism - Not really knowing about the topic (e.g., thinking Tim Hardin's scratching and sniffling came from too much hash), and questioning why the mass would desire such things for the stated purpose of creating 'heightened awareness' when all indications tended toward the reverse.
Later, through exposure to the concert culture of the 70's and 80's with its myriad personal irresponsibilities on the part of the audience and performers, that attitude appeared to become negatively reinforced.

For myself, I'm somewhat sympathetic to the 'anti-stimulant' stance while performing - IMO, it creates a wall of illusion that prevents communication...but what others do in their off-hours is their business, as long as it doesn't 'create a murder', so to speak.

Better in school than the cooking pot, Laura. Maybe.

well-stated, db, and I agree for most part, though the bio question still remains, at least for a few of us--was Zappa ridin' with the pigs in the 70s and 80s?? Some great music and all, but in a sense it sort of matters. In some circles Zappa's still considered ...a moderate of sorts. Some of the remaining MoI kitties at times hinted that FZ was rather cop-friendly (and they're not too fond of Gail)--as did the illustrious...Don VV (aka Capn BH), who dissed his former crony in no uncertain terms in the 80s (po' DVV's pretty near Muerto now ah hear---at least he made some scratch at the end with his Ahht).