Kicking a thawed Dick around 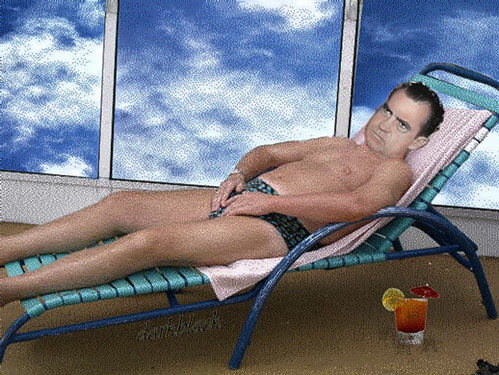 Officials at the National Archives have curated a searing recollection of the Watergate scandal, based on videotaped interviews with 150 associates of Richard M. Nixon, an interactive exhibition that was supposed to have opened on July 1.
But the Nixon Foundation — a group of Nixon loyalists who controlled this museum until the National Archives took it over three years ago — described it as unfair and distorted, and requested that the archives not approve the exhibition until its objections are addressed.

A sample quote from one of the objectors:

"The real question always comes to, Did the actions that he took that were wrong, did they merit impeachment and removal from my office?
My view is that they did not reach the level of offenses for which he could be impeached and convicted."

It wasn't the crime, it was the coverup. Nixon might have weathered the initial storm - after all, he was reelected with over 60% of the popular vote in '72, and if he had hung the burglary team out to dry (for public consumption, of course - payoffs and pardons in private, natch) and hadn't recorded his utter complicity for posterity...And tried to short-circuit the investigative process in a rather ham-handed fashion...and become frighteningly toxic to the minority GOP in a midterm election year...well, let's just say that Mistah Dick would have been the one doing the kicking around, liberal pansies.

The fact is, Nixon never died. He and his policies continued through Cheney, Rumsfeld, Kissinger and a plethora of other parasites who jettisoned their falling host only to carry on the disease forward into time.
His paranoiac legacy, stripped of its statesmanlike patina is now the world's present (and sadly, its likely future) due to the American public's fear of remembering their past in order not to repeat it.

As always in matters of Nixon, Hunter S. Thompson said it best:

'These revisionists have catapulted Nixon to the status of an American Caesar, claiming that when the definitive history of the 20th century is written, no other president will come close to Nixon in stature. "He will dwarf FDR and Truman," according to one scholar from Duke University.

It was all gibberish, of course. Nixon was no more a Saint than he was a Great President. He was more like Sammy Glick than Winston Churchill.
He was a cheap crook and a merciless war criminal who bombed more people to death in Laos and Cambodia than the U.S. Army lost in all of World War II, and he denied it to the day of his death.
When students at Kent State University, in Ohio, protested the bombing, he connived to have them attacked and slain by troops from the National Guard.
...
He has poisoned our water forever. Nixon will be remembered as a classic case of a smart man shitting in his own nest.
But he also shit in our nests, and that was the crime that history will burn on his memory like a brand.

By disgracing and degrading the Presidency of the United States, by fleeing the White House like a diseased cur, Richard Nixon broke the heart of the American Dream.'

When I read "Nixon never died", I thought for a moment that you were one of those weirdos like "Randal" that thinks Futurama is real. :P

I'm not sure how I feel about all of this.
On one hand I am so tired of people trying to rewrite history by leaving things out or adding so I think.. put everything you've got on him in the exhibit.
Then, on the other hand I think, it was so long ago and maybe some of the things they want to put in are distorted.

Let's face it. No one can do anything nowadays without someone bitching about it.
I do like the picture that you used.
A man with his hand on his package always works for me. Even with a Nixon head. :)

So forgive me if I didn't make any sense here today.. (nothing out of the norm I assure you). My head is pounding! I can't even blame the red wine as I didn't really drink it. :P

There's genuine historical revisionism due to updated facts, and then there's fingers-in-the-ears-LALALALALA fiction maintenance, Laura.
Much if not all of the Nixon Foundation's public posture falls into the latter category - keeping the flattering falsehoods alive for the benefit of the True Believers and those with a memory deficit.

So much of America's current troubles stem from the Nixon era, IMO - not only the recurring cast of characters in positions of power (reminiscent of the Iran-Contra crew reappearing in Bush 43's administration), but the forever-lost opportunity for the United States to look in a very dark mirror upon its bared soul and determine whether their values and actions match the proffered rhetoric...A classic case of repeating the same mistakes, yet expecting a different outcome.

ok i was over at Sunshine's blog and saw the title for this post and had to run right over here and swee what that was about..Nixon was definitel NOT what i supposed it was about!!
Har!
Nice blog!

Saltier items are behind the counter, Beej.

Thank you, and welcome.

Ferdinand Marcos was everything Nixon wanted to be.

I loved reading the Hunter Thompson histrionics...no one did it like him and still managed to hit the nail squarely on the head.
Nixons biggest flaw was his micro management...he trusted no one to fuck things up like only he could.
I remember very clearly the night he resigned. I stayed up all night listening to the radio call in programs...
"He wuz lak an ole' dog" the cracker lady from South Carolina mournfully droned into the phone piece...
"He wuz lak an ole' dog nobody wanted no more...they jess kicked him out the door....A pore sick ole' dog."

I am not an Animal!