So Sophisticated And Above It All 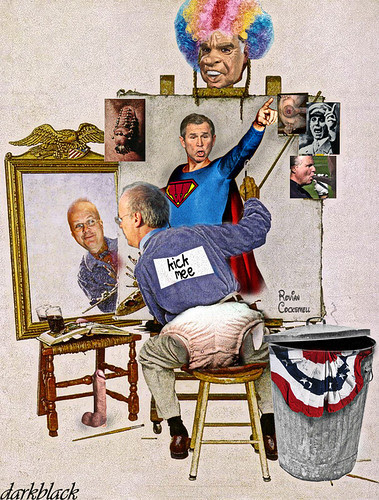 ...former White House senior adviser Karl Rove appears to harbor a certain condescension of his own towards "unsophisticated" Tea Partiers.

"To the extent that the Tea Party is equated with the Republican Party, is that (unfortunate language used this weekend at some of the rallies) a concern for you?" (MSBC's Savannah Guthrie) asked.

"This Tea Party movement is largely novices, relatively politically unsophisticated people, and as a result sometimes their rhetoric is raw and angry," Rove replied. "That's the downside."
...
Rove went on to excuse the violent rhetoric of the Tea Partiers by suggesting that "if you look back at the beginning of other similar movements, whether it's the anti-war movement or the civil rights movement or the pro-life movement, there are angry things said that I suspect in retrospect a lot of people realize are unfortunate and unnecessary."

'...relatively politically unsophisticated people' - Gosh, that sounds kind of like a coded phrase, doesn't it? I wonder what could be meant by that...?

I find it somewhat ludicrous that a sneeringly cynical political operative who thought nothing of exploiting people's fears and pandering to their prejudices throughout his dark career would now sniff daintily and declaim against the ruffian horde without whom his former employer would be just another ex-governor with an unblemished record of private-sector business failure and a fat trust fund from three generations of treason.

This self-serving chatter is especially egregious coming from one who so adeptly and quickly played a race card against an opponent's family member in a primary election.

Unfortunately, such comments might be well taken as a harbinger...A disavowal of responsibility for creation and prior manipulation of the monster, as it were. And such a convenient monster it is , too - always ready to wreak havoc and strike fear into the populace with the merest gentle breeze of a push from its caregiver.

But now the monster may be off the leash, as monsters tend toward doing when their creators pay more attention to deployment than control.
Or perhaps it's an attempt by newly disenfranchised conservatives at fomenting a home-grown 'Werwolf effect', creating the sort of civil unrest that leads to on-the-fence 'relatively politically unsophisticated people' voting for 'strong daddy' candidates to make the boogie men go away.
Just like before.

And would you put it past them? Really?

The last 4 decades of conservative politics have been about maximum exploitation at any cost.
Lie, cheat, steal, cover up, bribe, smear, slander, kill...rinse, repeat.
There are no boundaries of human decency among humanoids for whom winning is everything and losers 'pull the train' for the boys in cellblock 6.
It appears that we have come full bloody circle back to where Lee Atwater placed the beginning so succinctly, and no more caring about the niceties or the unpleasant optics:

Atwater: You start out in 1954 by saying, "N*gger, n*gger, n*gger." By 1968 you can't say "n*gger" -- that hurts you. Backfires. So you say stuff like forced busing, states' rights and all that stuff.
You're getting so abstract now you're talking about cutting taxes, and all these things you're talking about are totally economic things and a byproduct of them is blacks get hurt worse than whites.
And subconsciously maybe that is part of it. I'm not saying that. But I'm saying that if it is getting that abstract, and that coded, that we are doing away with the racial problem one way or the other. You follow me -- because obviously sitting around saying, "We want to cut this," is much more abstract than even the busing thing, and a hell of a lot more abstract than "N*gger, n*gger."

One of my all-time Darkblack favorites. . . It's that cocksucker Limbaugh.

Tail wags dog - dog rolls over. Tail eviscerates dog by accident. Oops - sorry Lee, the "southern strategy" can only take you so far in the age of information. It seems like the neocon/republican Titanic has finally struck the lowest denominator iceberg and there's no turning that sucker around now. Irrelevance awaits those who continue to embrace hate (Sarah, are you listening?). I believe that you cannot fool all the American public all the time forever. Hate media is slowly being exposed for what it truly is. This will end and probably not well, but it will end.

I'm holding my breath in anticipation we all soon get good and goddamned fed up, and each of us individually demand the angry adolescent throwing rocks and spitting, either sit down and be quiet while the grownups restore civility and intelligence to the conversation so we can get on with repairing the damage they have done while partying with the torturers and playing with guns. If they insist they just can't live with this "socialist government takeover," then let's work out a treaty for The Teabagger Terrorist Territory of Texbeckistan where there is no pesky government to provide unwanted public services when the GOPers and good old boys want to make a buck off it all, with no rules and no restraint.

Sorry for the rant, but I'm off my meds.

Yes, Terry, there's a couple of items in that picture that might be deemed 'uncivil'.

Loved the rant, Utah, but unfortunately we already tried the let's all be grown-ups routine in Nov. 2008 and we all see how super that's been working out.

Nope, it's a continued policy of scorched earth for me now and for always. Fuck those GOP redneck sonabitches and anyone who supports them.

And I don't pretend that El Rushbo and their ilk are going anywhere soon either. They may emotionally secede from the Union, but they will never leave.

Nixon in a rainbow afro wig made my day!