I`d rather switch than... 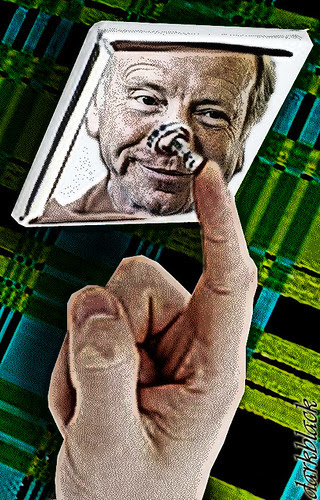 ...listen to this twaddling swill.

Sen. Joe Lieberman is telling his critics to "relax" over a bill that would allow the president to disable parts of the internet as he deems necessary.
China has an internet "kill switch" and the U.S. should too, according to Lieberman.

"We need this capacity in a time of war. We need the capacity for the president to say, internet service provider, we've got to disconnect the American internet from all traffic coming in from another foreign country, or we have to put a patch on this part of it," Lieberman told CNN's Candy Crowley Sunday.

"So I say to my friends on the internet, relax. Take a look at the bill. And this is something that we need to protect our country.

Right now China, the government, can disconnect parts of its internet in case of war and we need to have that here too," he said.

Sounds awfully needy...apparently becoming a apologist for communist repression tactics and "rogue nation" behaviors isn't the same sort of career-blasting minefield within American politics that it once was.

Good to know, comrades! And Senator Joe...as one of your "friends on the Ìnternet", congratulations on becoming another of the "many nooses around the neck of U.S. imperialism". That'll show those libs!

Of course, I'm sure I won't be the only 'party' pooper to bring this pesky detail to the fore:

Congress shall make no law respecting an establishment of religion, or prohibiting the free exercise thereof; or abridging the freedom of speech, or of the press; or the right of the people peaceably to assemble, and to petition the Government for a redress of grievances.

And 'there's the rub', microdot - This isn't some banana republic or long-term authoritarian political construct...It's the United States of America.
The 'Chicken Little' stratagem of using fear as a goad to permitting headlong dismantling of rights and freedoms is utterly contrary to everything I have ever been told, read or shown regarding American character, whether in the right or completely wrong.
It's one of the fundamental reasons why I continue to do what I do within the auspices of this blog.

Perhaps I'm too idealistic - To be fair, some are saying that 'this doesn't mean what you think it means', and no doubt it isn't as simple as giving a head of state unlimited power to act autocratically in a self-deemed emergency...But I have been observing Lieberman's legislative behaviors for some time now and have learned to view what he proffers with deep suspicion, based on where and with whom he has gone before.

i wish we could put a switch on lieberman