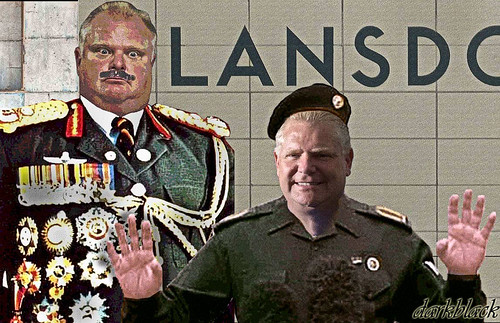 Much time today was spent enduring professional politicians and other media creatures seeking comity relief in the matter of Rob Ford, with most of them struggling like a toddler in a gunny sack to find an inoffensive quip that didn't sound like 'He was good to his mother', or some other such tripe meant to rack up airtime minutes without adding substance to a discussion.

I'm not known for writing nice things, and I'm not starting now. Caution to those of delicate feelings.

Unmerited fat-shaming aside, one only need look upon the outward physical appearance of Ford to note that here was a man who would not say no to his appetites, if they clamored loudly enough in his head.
All of his public troubles (and no doubt most of his private ones) only served to reinforce that rather obvious point past the rusted, blood-flecked edge where even the thickheaded might see a problem with the behavior patterns exhibited...and yet they encouraged the clown show onward, merely proving the dictum that the herd of sheep will run whichever way the shepherd's dog barks the loudest.

Never in my adult life have I seen a Canadian politician so pathologically unfit for the office they sought, and so determined to win it at any cost.
Rob Ford turned the governance of the largest city in Canada into his personal reality show-cum-carny midway, willfully and with intent. He personified in a self-indulgent way the ideological divide that the North American Conservative has lovingly cultivated like an abscessed toe against its opponents for decades - 'If you're not one of us, you're under us.'

He became a black eye on the image of Canada, and a cheap talk show gag device - 'Imagine that, a 'Canuck' that acts just like our political buffoons! - Ed, run tell Johnny!''...selfishly reducing a lofty office with serious responsibilities into 30 seconds of prime TV joke material on demand every night...among the last horrors seen before the American heads hit the pillow. Oh, the humanity.

Only in hindsight has Stephen Harper (with whom Ford shared his dysfunctional ideology) exceeded the termitic damage inflicted on the Great White North by dint of conservative malfeasance & unsuitability to actual political functionality, and there only because Harper was gambling with an entire nation's future...

My condolences go out to Rob Ford's family & friends - Cancer is a hideous disease that I would not wish on anyone - not even one whom I despise - but I refuse to honor someone who, instead of taking the well-worn Snowback route of importing Canadian comedy to laff-starved Yanks, made our country the punchline instead.