Posted by darkblack at 11:47 AM No comments:

retro darkblack #8 - Tea In The Sahara Posted by darkblack at 4:36 PM No comments: Posted by darkblack at 1:16 PM No comments: 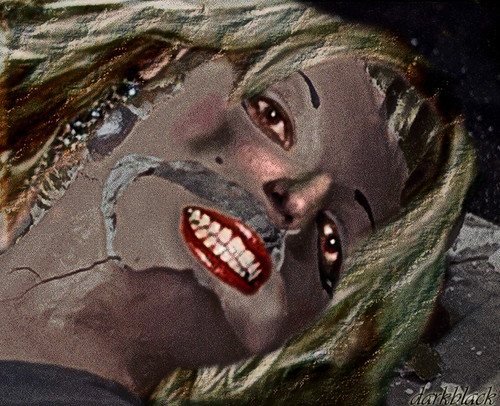 Posted by darkblack at 11:51 AM No comments:

retro darkblack #6 - One Of You Shall Betray Conservatism Posted by darkblack at 8:50 AM No comments: 'Mr. Sony,
Bring me a hit
Don't make me market
this tired, worn-out shit
Give me a first quarter like Occidental...
And scratch artist tsouris that drives me mental!

Mr. Sony (Yeessss?)...
Let's make a star
not just an assclown
who beats a guitar
Give them some talent that we can trumpet
and an image that just screams strumpet!

Mr. Sony,
A juicy payday
would be so peachy for my 401K
So please try to be gallant
Mr. Sony, bring me,
please, please, please,
...bring me a bastard with talent!'

Posted by darkblack at 12:24 PM No comments: Posted by darkblack at 3:55 PM No comments:

retro darkblack #3: Let Us Take You Down Vanilli's On The Half Sellout Those of you out there willing to still spare a glance have no doubt noted that I don't really offer as much music around here as before (cue Miles Davis here, hipsters).

There could be several plausible explanations for this sordid state of affairs, of course. The most obvious one (to me, at least) was that, much like sex, music is far more fun to do or watch than to type about...And I'm not going to have that kind of fun typing around here.

The others are far more subjective. I'm fresh out of proselytization sauce for my word salads, perhaps. Selah.

However, I'm always a mark for a ginned-up controversy - it's been my stock in trade for years, and this one in particular positively reeks of the juniper berry.

The Red Hot Chili Peppers decided long ago they were never going to mime a live performance. The band made an exception for the National Football League, it turns out. The group's bassist, Flea, said in a letter to fans posted on the group's website Tuesday that the Rock and Roll Hall of Fame members pretended to play along to a pre-taped track of "Give It Away" during the American football championship Super Bowl halftime show as Anthony Kiedis sang live. The request came from NFL officials who felt it was too difficult to pull off a completely live performance because of potential sound issues. The admission came after observers noted Flea and his bandmates weren't plugged in while performing Sunday at MetLife Stadium in East Rutherford, New Jersey.

Well! I am shocked! My solicitors will be in touch! And all that rubbish.

From the top, I think Flea has pretty much put it with reason, albeit in a tragically flawed way:

Flea... I mean we all know, but for god's sake at least try to humor the children. #unpluggedlive pic.twitter.com/ferJuOQpkP

I'm always amused by these 'music controversies', because they say much about the actual attention and retention span of a mass audience over time. Quite frankly, many among us would do far better to always be aware of the incessant playacting and sideshows offered without apology around the dial and around the clock, let alone awareness of the things that actually matter. As imaginative as I might think I am or pretend to be, I cannot imagine a mind that suspends logical activity to that degree within the parameters of observing such tightly scripted and cued major entertainment, sporting and political events upon which more money and other intangibles than most of us can dream of lay tremulously upon a very tight line. Even commonplace musical events - or at the very least, commonplace to the performers (ahem) - are not to be left to chance. I daresay if one could identify this somewhat credulous demographic and cross-correlate with other known deviancies, a quite remarkable psychological profile might emerge for further study.

Meanwhile, let's observe these rank offenders against the common perception that everything is real in simpler times, when their hickory trickery fakery was far less obvious. Young children, avert thine eyes. Posted by darkblack at 4:17 PM No comments: