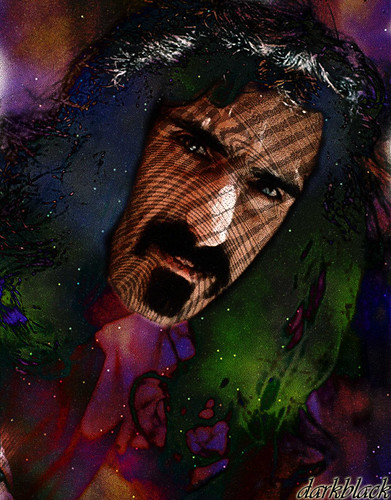 "My theory is that music is good, it's the only religion that delivers the goods.
And anybody who wants to hear any kind of music is entitled to hear that music because it's good for you – it makes you feel good.
If you like it, go for it. Just because I don't like it doesn't mean anything – it's a matter of personal taste."

And a happy Zappadan to you & yours, BG.

my physician once quoted zappa to me - "in the fight between you and the world, bet on the world"

and speaking of forces bigger than oneself, and religion, as frank did, reminds me of robert wright's discussion of religion and self-interest in his 2009 book "the evolution of god" - the overarching theme of which is how ideas about god have matured over time and may, wright hopes, continue to do so, despite the fact that so many of our fellow human beings seem to be fixated on archaic and counterproductive belief systems these days, which not only make them unhappier than they need to be, but even are offered as justifications for mass murder

>>It may seem cynical to see all religion as basically self-serving. And indeed the idea has been put pithily by a famous cynic. H. L. Mencken said of religion, “Its single function is to give man access to the powers which seem to control his destiny, and its single purpose is to induce those powers to be friendly to him. . . . Nothing else is essential.” But less cynical people have also put self-interest at the core of religion, if in loftier language. About a century ago, the psychologist William James wrote in The Varieties of Religious Experience that religion “consists of the belief that there is an unseen order, and that our supreme good lies in harmoniously adjusting ourselves thereto.”

The difference between Mencken’s and James’s formulations is important. In Mencken’s version the object of the game is to change the behavior of the supernatural beings. James’s version doesn’t quite exclude this possibility, but it places more of the burden of change on us; we are to “harmoniously adjust” ourselves to the “unseen order.” James seems to be making the modern assumption that the unseen order — the divine, as people say these days — is inherently good; that discrepancies between divine designs and our own aims reflect shortcomings on our part.

Of course, religion has in one sense or another always been about self-interest. Religious doctrines can’t survive if they don’t appeal to the psychology of the people whose brains harbor them, and self-interest is one potent source of appeal. But self-interest can assume many forms, and for that matter it can be aligned, or not aligned, with many other interests: the interest of the family, the interest of the society, the interest of the world, the interest of moral and spiritual truth. Religion almost always forms a link between self-interest and some of those other interests, but which ones it links to, and how, change over time. And over time there has been — on balance, taking the long view — a pattern in the change. Religion has gotten closer to moral and spiritual truth, and for that matter more compatible with scientific truth. Religion hasn’t just evolved; it has matured. One premise of this book is that the story of religion, beginning back in the Stone Age, is to some extent a movement from Mencken to James.

Religion needs to mature more if the world is going to survive in good shape — and for that matter if religion is to hold the respect of intellectually critical people. But before we take up these questions, we’ll address the question of how it has matured to date: how we got from the hunter-gatherer religions that were the norm 12,000 years ago to the monotheism that is the foundation of Judaism, Christianity, and Islam. Then we’ll be in position to ponder the future of religion and to talk about how true it is or can be.<<

i like wright because i can't believe in divine providence, and yet want to suppose, along the lines of einstein's famous remark, that the universe is a friendly place - that 'tis better to be subject to aging, illness, death, the loss of all one cares about, and the inevitable consequence of one's good and evil actions, than never to exist at all